My inter-disciplinary project, combining Classics and Geography, explores the role and function of trees in the city of Rome and its environs, concentrating on the transitional period between Republic and Principate (c. 100 BC - AD 100). It takes evidence from a variety of sources, crossing archaeological, literary, and visual boundaries, in order to provide as complete a picture as possible of the role of trees in the ancient city, with a particular focus on their function in the triumphal procession and the conquest of new territories.

In order to better facilitate my research, I attended the City of Rome course at the British School in Rome from April to May 2016, during which time I analysed the usage of leaves in Rome's crowns, utilising the archival resources in Rome, particularly useful for the consultation of visual evidence.

At the early stages of my doctoral research, I began the compilation of a database, which collates the literary references to specific, named species of tree in Latin literature. This database, the Roman Trees Database will be made open access in the near future.

The Memory of Trees

20/04/17: The Tree at the Heart of Rome: The Ruminal Fig Tree as a Natural Monument in Ancient Rome

09/04/16: Cupressus Advena: Pliny the Elder and the Naturalisation of Foreign Trees

24/02/16: Destruction of Landscapes in the Roman World

19/03/16: Creating a Wasteland: The Ramifications of Roman War on the Environment

Student Feedback: ‘I found the classes interesting and educative.’

‘These lessons have been very helpful and I feel they have improved my understanding of grammar.’

‘He is good at explaining things.’

Nominated for a University of Nottingham Staff Oscar for ‘Teaching – Best All Rounder’.

Wonder 2017, University of Nottingham, 17th June 2017: Personal research on the crowns of the Roman Republic and Empire was presented to the local community at a public event.

Blog: Mint Imperials (2015, Nottingham) 'On this day in AD175 Commodus took the toga virilis, the sign he had entered adulthood' 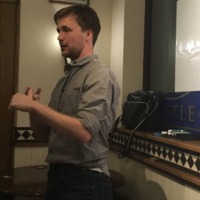