Thesis Title: Ritual, Rhetoric and the Polemic Against the Host of Heaven. (submitted Sept. 2018) 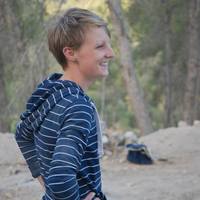