I am currently engaged in an inter-disciplinary project co-supervised by the departments of Classics & Archaeology and American & Canadian Studies that examines the depiction of the ancient world in early American theatre, from the first American performance in 1732 of Joseph Addison's Cato, A Tragedy to the 1831 premier of Robert Montgomery Bird's The Gladiator. Along the way, I examine how the peculiar circumstances of the early United States influenced the way in which the classics were received on stage, and investigate how American audiences used the ancient world as a medium through which to explore a variety of contemporary issues.

My broader research interests relate to the reception of the ancient world in North America during the Age of Enlightenment. I have recently published an article within OUP's Classical Receptions Journal titled 'Tradition in transformation: the classical curriculum in the colonial and early national American college', that examines how the pressures of nation-building altered the manner in which the classics were taught in the early United States. As my career develops, I look forward to building on this research interest and continuing to contribute to the development of this field.

Besides these interests, I have recently begin to develop a more academic interest in developing and innovating the teaching methods employed within the higher education sector, particularly with regards to the potential of digital pedagogy. Alongside Dr Neil Hughes, Digital Learning Director for the Faculty of Arts within the University of Nottingham, I have delivered conferences papers outlining the practices and potentials of digital and blended learning approaches, and together we have had a chapter accepted for publication within an edited volume on the subject.

I am a great believer in the importance of disseminating research outside the four walls of the academy. As such presently sit on the committee of the Nottingham branch of the Classical Association, co-founded as served as Lead Review Editor on the Nottingham-based open-source Midlands Historical Review journal, have volunteered with the British Museum's Portable Antiquities Scheme, assisted with the organisation and marketing of a variety of both digital and physical exhibitions,, and make regular efforts to publish short articles in local newspapers and University blogs.

I maintain a broad portfolio of teaching interests to reflect the interdisciplinary nature of my work. Within the department of Classics and Archaeology I have previously taught Latin, for which I received the University of Nottingham's award for the 'Best Postgraduate that teaches', and on a module titled 'Classics and Popular Culture' convened by Dr. Lynn Fotheringham. I currently teach on a module titled 'Classics and Film' that is convened by Dr Carl Buckland.

Outside the department of Classics and Archaeology I also presently teach on the University of Nottingham's Arts and Humanities Foundation Year's 'Important Thinkers Through History' module. I am responsible for designing and leading lectures and seminars on key philosophers and thinkers of the Enlightenment, such as John Locke and Thomas Paine. For the first time, this year I have also begun leading seminars on a module titled 'Freedom and Obligation' convened by the University of Nottingham's Department of Philosophy. The module aims to develop second and third year students' approach to the problems of political philosophy, and is oriented around a study and critique of three key figures in the history of political philosophy: Thomas Hobbes, John Locke, and Jean-Jacques Rousseau.

Besides the Arts and Humanities Foundation Year, I also maintain a role as a teaching affiliate on the University of Nottingham's new Liberal Arts programme. I was involved in the inception and founding of the programme and now take a broadly pastoral role, assisting in the personal and pedagogical development of the students.

Born and schooled in Birmingham, I undertook the grand odyssey from the West Midlands to the East Midlands in 2012 to begin my studies at the University of Nottingham. Perhaps encouraged by my readings of D.H. Lawrence, I have since developed a true fondness for the landscape and culture of the East Midlands and hold the region and peoples incredibly dear to me.

My time at Nottingham has occasionally been interrupted with intermittent professional and research visits abroad, including a few summers working as a surveyor for the much-maligned HS2, a four month research fellowship at the Library of Congress' Kluge Centre in Washington D.C., and a three month placement as a Research Advocate at Stratford-upon-Avon's Shakespeare Birthplace Trust.

I am presently engaged in the final year of my PhD and am aiming to submit this academic year. After this I hope to continue working within higher education and settle down to building a home and family with my wife Lois, whom I met in a Latin class at the University of Nottingham. 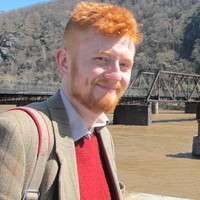